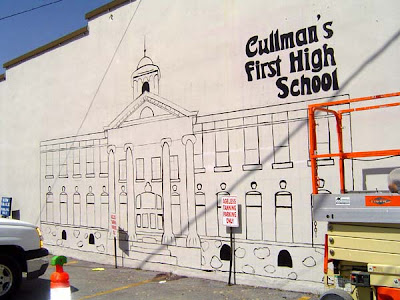 Posted by Cullman County Historical Society at 11:10 PM No comments:

See it at artist Bethany Kerr's website: Happy to Be Called Mommy!
Posted by Cullman County Historical Society at 10:19 PM No comments: 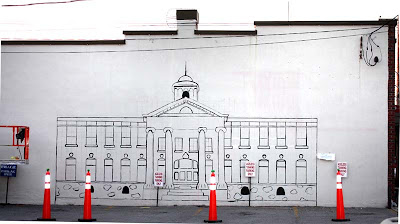 Bethany Kerr has begun work on the mural of the original Cullman High School. She is outlining the school, while students will help with the painting. The mural is on the southern wall of The Community Shoppers Guide on First Avenue Southwest at U.S. 278 (Across from Wachovia Bank.)

Cullman: A History in Postcards

Get your copy of The Cullman County Historical Society's book "Cullman: A History in Pictures" for $20. Includes 49 postcards from Cullman's past along with background info on the location shown. Messages written on the back show glimpses into everday life from the early 20th century.
Contact Frances at 256-734-1532 or e-mail frances@csgonline.com.
Posted by Cullman County Historical Society at 9:45 AM No comments: 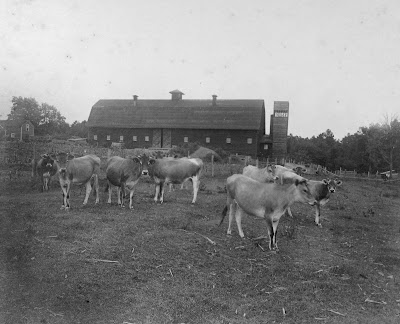 The landmark Swafford Barn, the war over electric power and the true fate of one of Cullman County's best-known African-American residents were discussed at the March meeting of the Cullman County Historical Society. 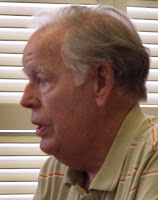 Harold Mayo shared his recollections and fielded questions from those in attendance.

When giving directions "you used to tell somebody, 'Go four miles past Swafford barn,'" Mayo said. Swafford barn was notable both because it was a rare barn that wasn't painted red and also because of its large size: It had three lofts with elevator in the back.

Asked about the location of Shicks Bluff, which is featured in the historical society's postcard book, Mayo explained that the popular fishing and camping area was behind the St. Bernard campus and a church on Welti Road. A cabin built by a group of men who used to enjoy the site burned and was never rebuilt. The fire's cause was credited by folks on a nearby preacher who suspected the men were doing more than fishing on their excursions, Mayo said, though apparently charges were never filed.

Mayo also dispelled the story that Charlie Bugg, a well-known black resident, was secretly buried in the city cemetery after dying while playing poker at the ice factory. Turns out, Bugg actually died in World War I, according to records from undertaker Oskar Fisher.

Bugg also was known for his size 15 shoes. A local shoemaker would run a contest, setting a pair of size 15 shoes atop a block of ice and asking people to guess how long it would take from the soles of the shoes to touch the sidewalk. The winner got a  free pair of shoes, and Bugg got the size 15s used in the contest.

Then there was what came to be known on official maps as "Sugar Creek." Residents had a less-than-sweet name for the creek that caught raw sewage from several outhouses that sat along it and from three businesses that had dug a secret ditch to it. When cartographers from Birmingham set out to make an official map, the mayor just told them to label it "Sugar Creek."

The formation of the Cullman Electric Cooperative came with a fight, Mayo said. Alabama Power at first didn't want to give up its lines, and employees would climb power poles with guns strapped to their sides. Eventually, Alabama Power gave up the battle, and the co-op bought the lines. "It was a war for a while," he said.

Among other tales of Cullman's past, Mayo noted that the name of Peoples Drug was derived from the Peoples Party, a forerunner of today's Tea Party movement that had split from the Republican party. At one time there were businesses named Peoples Barber Shop and Peoples Phone Company. 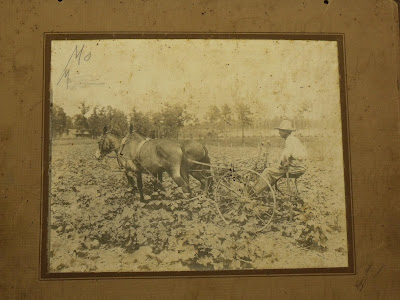 Posted by Cullman County Historical Society at 8:51 PM No comments: 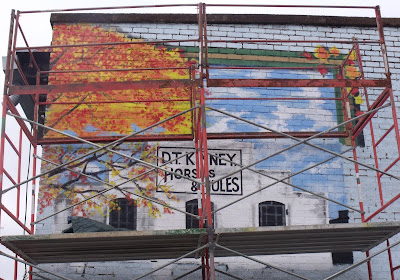 Rain halted progress today on the Kinney mule and horse barn mural in downtown Cullman, but here's the progress so far.
Posted by Cullman County Historical Society at 1:51 PM No comments:

Additions to 'Welcome to Cullman' mural

Artist Bethany Kerr has made two additions to the "Welcome to Cullman" mural on U.S. 278 West: "Founded 1873" was added beneath the name "Col. John G. Cullman" and American and Alabama flags were added to the right of the mural under the Newman's Cleaners & Laundry sign. See more photos on her blog. (Click on photos to see larger.) 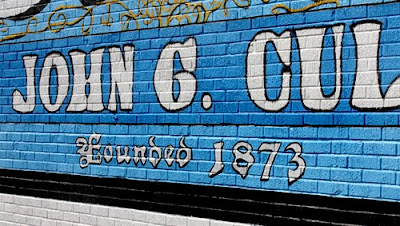 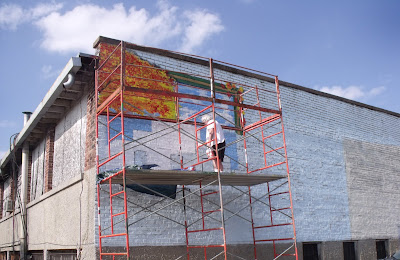 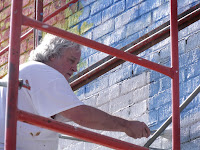 Artist Jack Tupper has begun the next set of historical murals. Here, Tupper is painting the first of five scenes from Cullman in the 1880s, D.T. Kinney's horse and mule barn. Other scenes will include Werdt's Deli, the first fire station, the first courthouse and Dinckelburg's Christmas Store with its famous magnolia tree.

The murals are being painted on the side of Ames and Ames Law Office on U.S. 31 in downtown Cullman, catercorner from the current county courthouse and across  the street from First Baptist Church.
Posted by Cullman County Historical Society at 2:56 PM 1 comment:

Garden City's Homecoming Jubilee is set for October 9th. If you have a car, truck, tractor or motorcycle you'd like show off, are interested in a food or arts and crafts vendor booth or want to volunteer, call 352-5408 or e-mail townofgardencity@bellsouth.net.
Posted by Cullman County Historical Society at 9:43 PM No comments: 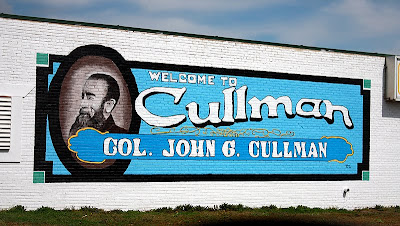 Posted by Cullman County Historical Society at 7:20 PM No comments: 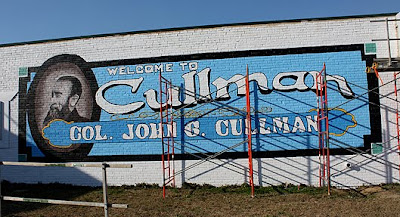 The first in a series of murals, "Welcome to Cullman," has been completed on the side of Newman's Cleaners & Laundry. Artist Bethany Kerr says she still needs to do some detail work on the oval, but the work is essentially finished. She was asked by the business' owner to repaint the sign to match the colors of the mural. (Photos courtesy of Bethany Kerr)
Posted by Cullman County Historical Society at 9:24 PM No comments: 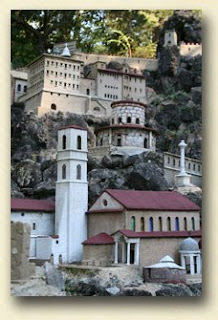 In honor of the new Tim Burton movie "Alice in Wonderland," USA Today listed "10 great places to go through the looking glass." Cullman's own Ave Maria Grotto at St. Bernard Abbey made the list.

"This beautifully landscaped park is the setting for 125 miniature reproductions of some of the world's most historic buildings and shrines, created from cold-cream jars, glass fragments, shells, tiles, stones, marbles and concrete," (Janet Friedman, founder of eccentricamerica.com) says. " Joseph Zoettl, a Benedictine monk, worked for three decades on his creations, using postcards for inspiration."
avemariagrotto.com
Posted by Owen Tew at 3:33 PM No comments:

Governor Bob Riley will officially launch the Year of Alabama Small Towns and Downtowns Tuesday, March 9 at the RSA Activity Center at Noon.

The RSA Activity Center is on Dexter Avenue in Montgomery.
Posted by Owen Tew at 12:18 PM No comments:


A snippet of Asa Hartwig's recent talk to the Cullman County Historical Society on Cullman's history. Hartwig explains how the City of Cullman became so popular with beer-drinkers, as only it and Balwin County on the Gulf of Mexico, could sell draft beer. All other bars throughout the state had to sell homebrew, which didn't taste as good, making Cullman a popular weekend travel spot.

That popularity eventually led to Cullman becoming a dry county.
Posted by Cullman County Historical Society at 11:10 PM No comments: 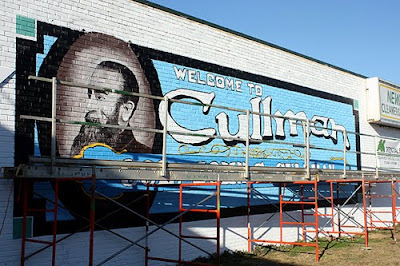 Artist Bethany Kerr says she needs only to get the scaffolding moved so she can finish the framing around Col. Cullmann's portrait, and her "Welcome to Cullman" on the side of Newman's Cleaners will be complete.
Read about her progress and see more photos on her blog.
Posted by Owen Tew at 1:58 PM No comments: 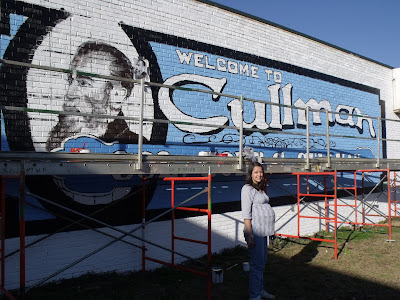 Artist Bethany Kerr with her mural on Newman's Cleaners.

Here are the murals planned for downtown Cullman:

Repainting vintage signs on historic buildings no longer in operation but building remains, all over town, especially in the Warehouse District 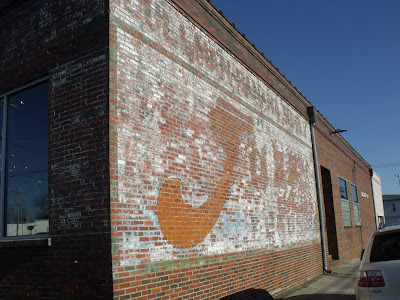 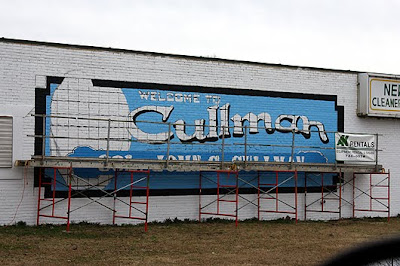 (Photos courtesy Bethany Kerr)
The first of several murals with historical themes to be painted in Cullman is going up on the side of Newman's Cleaners on U.S. 278 West. Keep up with the progress of this mural at the artist's website: Happy to Be Called a Mommy.

Below is how the finished mural will look, complete with Col. Cullmann's picture: 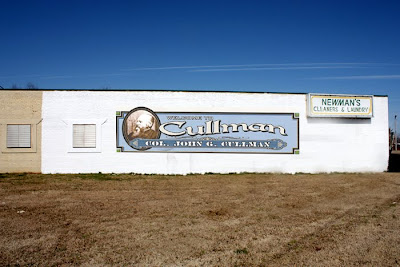 Posted by Cullman County Historical Society at 10:03 PM No comments: