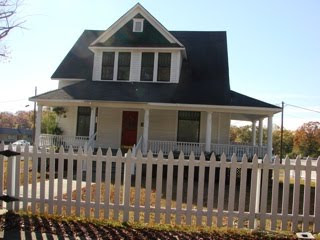 The new headquarters of the Cullman County Historical Society and a renovated downtown commercial building are among the homes to be featured in the society’s annual Christmas Tour of Homes on Sunday, December 5.

The historic Hays House (pictured above) at 611 First Ave. SW will be open from 2 until 5 p.m. for tours and to sell tickets to the tour. The Historical Society dedicated the former home of Dr. Luther Hays as its new headquarters in November. Dr. Hays began practicing medicine in Cullman in 1901. The home he built with his wife Ethel features a wrap-around porch typical of Southern houses. In addition to his family’s quarters, the house also held his medical office. 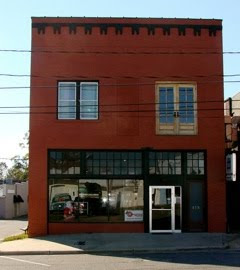 The offices of Lee Powell Cotton States, (pictured right) will also be open for the tour. Lee and Ginger Powell bought the two story commercial building two years ago, with plans to make it office space for his insurance business and a loft home upstairs for their young family. The building has housed several businesses in recent years but is best known as the Nehi Building. The local Royal Crown bottling company mixed its fizzy concoctions on the second floor and bottled and sold them on the first floor.

The home of Jay and Alice Page, is on the Alabama Historic Commission’s Register of Landmarks and Historic Buildings. It is a Jacobean Revival style house and its beautiful and original architectural features have been preserved. The home was built by Dwight and Gladys Fuller. Bertha Cooper, a longtime employee of Leeth Bank, lived in the house for many years. It was featured in the Dot Graf book, "If Walls Could Talk."

The Hartung-Bonham home, was built in 1930 by Dr. Phillip Hartung, the grand-nephew of Col. Johann Gottfried Cullmann, our town’s founder. It remained in the possession of his descendants until this century. The Dutch Colonial style home is now owned by Becky Bonham. When the house was built, it was part of Cullman’s medical district. A small hospital was located nearby. Many of the nearby homes were doctors’ homes and offices. A front room of the house likely was an office for Dr. Hartung and is now a studio for Bonham.

The home of Charlotte and the late William Meredith, was also built in the 1930s by Charles Edward Young. Mr. Young also built the house next door and lived there with his mother. He built the Meredith house as a three-unit apartment building. When Suzanne and Neil Freeman (Cullman’s former superintendent of education) bought the houses from the Young estate, they totally renovated both as single-family homes.

Tickets for the tour will be sold at the Hays House, as well as at each home on the tour. They cost $10. Proceeds from the sale of tickets are used by the Cullman County Historical Society for its projects in the community, including the new murals of historic scenes on downtown buildings. The Historic Society is a non-profit, tax-exempt organization.
Posted by Owen Tew at 10:38 AM 1 comment: 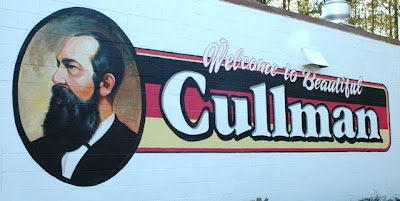 est in the state's "2010: Year of Small Town and Downtown" program. The society's past president and current executive board member Dot Gudger, who got the mural project started, and Mayor Max Townsend, who lent support, also spoke.

Artists Bethany Kerr, Jack Tupper, Adrian Scott, Steve Carter, Donald Walker and Cullman Aquatic Center campers with leader Kristie Turner were thanked for their work, as were donors and building owners who allowed murals to be painted on their property.

Click here to see a Google map of the murals and other historic sites in Cullman. 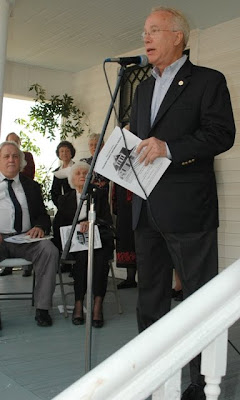 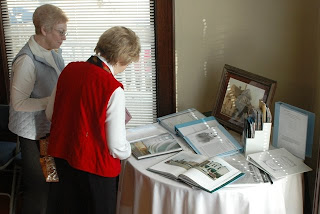 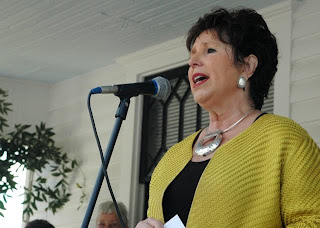 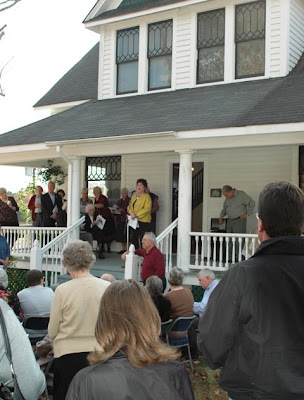 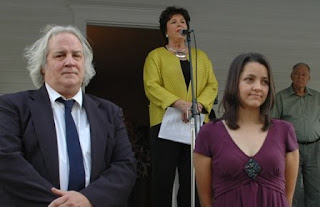 Jack Tupper and Bethany Kerr, front, and Dot Gudger, back

Cullman historical murals to be dedicated 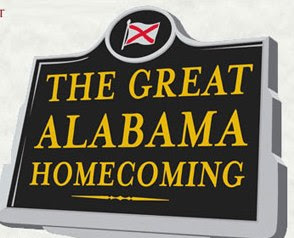 The Cullman County Historical Society will hold an official dedication of the "2010: Year of Small Town and Downtown" project, "Lest We Forget" Cullman murals.

The Dr. Luther Hayes Home will be dedicated as the new headquarters of the historical society and will be open for a reception before and after the dedication.

After the ceremony, attendees may ride CARTS buses to each mural with a guide who will tell the story of each mural. The tour will also stop at the new "2010: Year of Small Town and Downtown" historical marker telling the story of Cullman County.

The ceremony will begin at 2 p.m., Sunday, November 21, 2010 at the Hayes House, 611 First Avenue SW, one block south of the Cullman County Courthouse.

The beautiful paintings were done by local artists on the sides of public buildings. The first was a portrait of Col. Johann Cullmann, the town's founder, on the side of Newman's Cleaners on Hwy. 278. Others murals depict historic buildings which no longer exist, including the first county courthouse, Werdt's Deli and the Leeth Bank. Others include the USS Cuilman, a troop transport ship active during World War II, and an South and North train locomotive.

See our Google map of the murals and other historic sites here.
Posted by Owen Tew at 8:18 PM No comments: