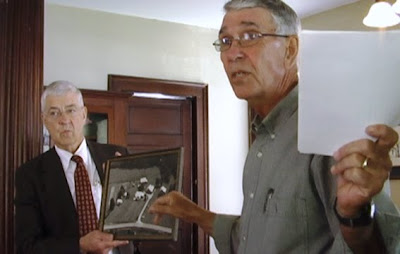 Ray Heitmueller, right, talks about his family as Dr. Bill Peinhardt, historical society vice president, holds up a picture of Heitmueller's farm, above, and ancestors, below. 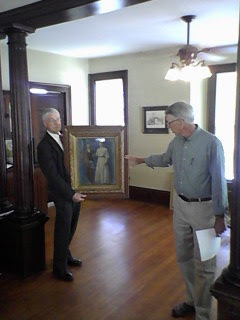 Ray Heitmueller shared a little of how his family came to Cullman and some show-and-tell items at the April meeting of the Cullman County Historical Society.

Since 1968 Heitmueller has lived on the farm first settled by his great-grandfather in the 1870s. The farm, originally 200 acres, has dwindled over the years -- part of going to Lake George when it was first dammed.

Heitmueller noted that several dialects of German were spoken in the North Alabama city founded by Col. Johann G. Cullmann, and that some Germans had trouble understanding others who were from a different region.

The former Cullman High School teacher also showed a helmet worn by his great-grandfather, Henry Otto Heitmüller Sr., in Kaiser Wilhem's army and a farm implement perfected by his Uncle Henry. The scratcher required a farmer to take only one wrench to the field to make adjustments.

The Heitmueller farm didn't have terrace rows, he noted, but rather had nine rows plowed in different directions with ditches to drain water to a meadow.

Heitmueller also noted that not everyone was fond of the city's founder. Some, including his grandfather, said Cullmann "brought a bunch of Germans here and damn near let them starve to death." Other historical society members agreed that there was such sentiment among some settlers. 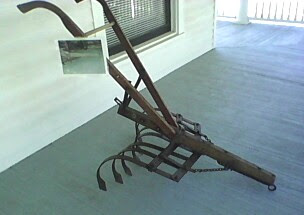 Before and after views of the Cullman Banana Supply/Jazz Feeds signs restoration by Bethan Kerr. Located at 1st Avenue SE and 1st Street NE: 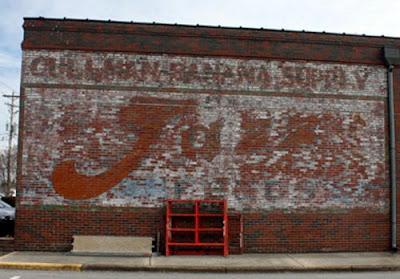 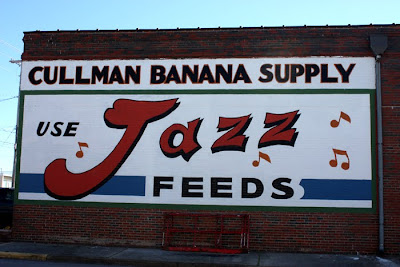